How did you get into Revolve?
In 2007 I started my own clothing brand. I met Revolve in 2008 and they became my biggest client. In late 2009, when the recession happened, I ran out of money so I couldn’t ship any of the orders people had placed and I had to close my store. Months later, Michael Mente, Co-Founder and Co-CEO of Revolve, reached out to me kindly and asked if I would be interested in starting a brand together. We launched Lovers + Friends in February 2010. In 2014, Revolve (it) took over and I became an official Revolve employee. I don’t really remember when I became Chief Brand Officer to be honest, but it just happened so organically. I never really thought about my title in the company.

You were at the forefront of influencer marketing. Can you explain what that is?
I think the easiest way to explain influencer marketing is that influencers are kind of “normal people” who really believe they have a sense of style to convey to others in their community and are obviously focused the community now really on social media. I did a lot of influencer and blogger marketing with Lovers + Friends on a very, very small scale. When Revolve acquired (the brand), they basically asked me to try some of the marketing tactics that I was testing. 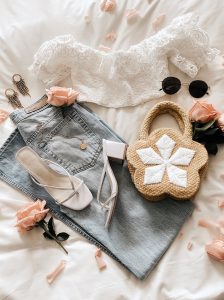 How did Revolve Around the World come about?
I studied abroad in Italy and after graduating from college, I traveled Europe fairly consistently with my friends. Seeing the rise of Instagram and fashion bloggers, I presented an idea to our co-CEOs and told them that I always wanted to be in the best shape and have the cutest outfits when traveling with my friends. I wanted to take photos and post them on MySpace or Friendster, which was social media back then. If you really think about it, this concept of photography is really nothing new. It’s much like what you did to your parents when you were little – your parents developed the images of your annual family vacation. So I figured out why I shouldn’t be really ambitious and show these millions of people on Instagram.

Did you miss traveling this year?
I miss it so much to be honest. Of course we can’t travel internationally, but it really puts things into perspective. There are so many days that I check my phone because I have so many photos from our adventures over the past seven years. It still kills me with all the places we’ve been to; it literally gives me goosebumps.

Books and studying make for a colourful mixture: Solar Messages

Entrepreneur Paras Gola Inspiring Journey From Being a Influencer to Business Expert.