S.cotland is rich in wild stories. Ruins, relics and the stories behind them can be found in the more isolated landscapes – forgotten, overlooked and often hidden due to the sheer geographical remoteness.

There was a specific journey and historical narrative that I wanted to follow for years. The Jock’s Road Pass leads over a crossing through empty valleys and over the peaks of desolate mountains with whale ridges. I would traverse it from north to south, leaving the chocolate box highland village of Braemar and hiking 20km over raised bog to end my route amid the sheer cliffs and wooded slopes of Glen Clova. Although it was possible to walk in one day, I opted for a leisurely pace and stayed in one of the most unusual mountain cabins in Scotland.

The route was created through centuries of human and animal footsteps. I hoped to feel some of the weight of this passage. Knowing the ritual and routine of the ranchers who once used it to bring cattle hundreds of kilometers to market: a practice that went on for ten generations but has now been forgotten. 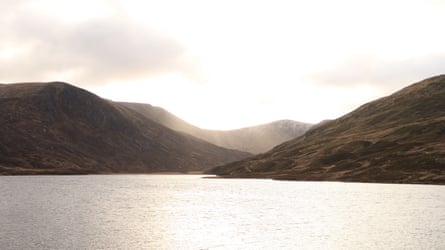 After walking south from Braemar into the wide glacier area of ​​Glen Clunie for an hour and then traveling 3 miles on a bumpy route along Glen Callater, it was a relief to reach the small complex of buildings at Callater Stables. The sturdy structures felt strangely out of place in such a wilderness, taking up an otherwise empty space at the end of a thin hole around which tan slopes rose. I took time to rest from my morning walk, make tea, and sit with my back against one of the buildings.

This was once a resting point for the cattle breeders: their last break before the most difficult section of their journey: the ascent to the windblown hill of the plateau. Between the buildings there is still both, a thick-walled converted stable with separate living and sleeping rooms.

The transition to the upper reaches of Glen Callater felt significant, like crossing a marker as the landscape got rougher and more elemental. The surrounding slopes were closer now, and the views of the early part of my walk were replaced with narrow lines of sight: sharp, overlapping angles and the falling diagonals of converging ridges. The colors had also changed: the yellow-green of the bog grass had been replaced by the purple-brown of the old heather and the deep black of the peat rabbits.

It took skill and perseverance to get cattle through this terrain and across the mountainous expanse. “Knowledge of the land had to be extensive and intimate, while perseverance and the ability to face great difficulties were essential,” wrote historian ARB Haldane in his 1952 book The Drove Roads of Scotland. The men slept with their cattle in the open air, were fully exposed to the mountain weather and only wrapped in blankets, or (more often) only in the plaids they wore during the day.

The provisions were limited to what could be promoted. Walter Scott described the typical Drover diet as just “a couple of handfuls of oatmeal and two or three onions, refreshed from time to time, and a ram’s horn filled with whiskey.” For extra livelihood, ranchers would bleed their animals and mix this with oatmeal to make black pudding. It felt a far cry from my dehydrated, high-energy trail food. 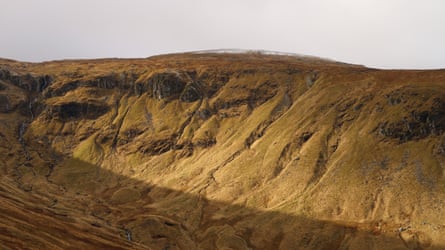 When I was on the heights of the Mounth Plateau, I needed to recalibrate my senses as I walked into a thick cloud. Trying to find landmarks for a compass bearing was hopeless, but listening and touching were increased to make up for this. The wind howled, the cold a little harder.

I was happy to be out in late summer and remembered the ominous description of the route in winter that I had read in the Scottish Hill Tracks Guide: “At this time of year, the path across the plateau is likely snow-covered and completely invisible for several months . “

In fact, it was the extreme weather on New Year’s Day 1959 that condemned the five members of a mountain walking club in Glasgow. In attempting the long crossing through a terrible storm, the men failed to achieve the relative safety of Glen Clova on the other side and succumbed one by one to arctic conditions – Britain’s worst mountaineering disaster at the time. The tiny refuge I wanted to stay in, known as Davy’s Bourach, was built a few years later – in memory of the hikers – as an emergency shelter just before the long descent to Glen Clova.

A knowledge of tragedy still gives Jock’s Road and the mountains that surround it a poignant beauty. The landscape here is different from the peaks of the Scottish west coast. Instead, the vast expanses of raised bogs, sweeping corridors, and gusty peaks hold their own harsh and often solemn splendor. 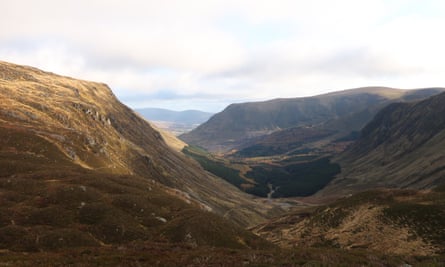 It was certainly a place that many were worth fighting for. After Duncan Macpherson made his fortune as a sheep farmer in Australia in 1885, he returned to his native Scotland and bought the Glen Doll estate. He immediately tried to block access to his land, but was directly attacked by the newly formed Scottish Rights of Way Society (now ScotWays) who wanted to keep the route open. The dispute went from the slope to the House of Lords and bankrupted both parties, but was ultimately ruled in favor of the company in 1887. The trail was named Jock’s Road after Jock Winter, a local shepherd who fought alongside the Scottish Rights of Way Society. The ruling set a legal precedent and prompted a series of legislative moves that would lay the foundation for Scotland’s modern freedom of exploration over the next century.

On the highest part of the trail the wind intensified and the fog turned into fast-flying rainballs. I followed a well-established path full of footprints, hood up and head down, and I nearly missed the entrance to Davy’s Bourach hideout, a tiny door in a red mailbox set into a rock wall. 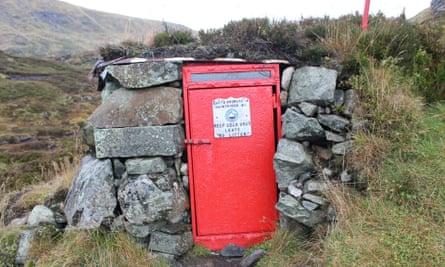 Inside, the small room was dark and too low to stand up, but large enough to accommodate a small group of hikers in the worst of conditions. I was engaged in a familiar routine. I hung my soaked clothes on the roof beams, heaped the extra layers from my backpack, and started heating pasta on my stove. It was a cold but excitingly wild night at the shelter. Rainwater was dripping through gaps in the roof (although it has since been renovated) and I fell asleep hearing the horror movie giggles of ptarmigan as they perched outside.

The next morning, dawn was exactly the same as dusk – as if minutes, not a night, had passed. I was still in the clouds, the rain heavy and directionless. I was climbing a small ridge behind the shelter when the path fell through a gap at a waterfall. I tried to imagine the drivers in this section. The route was so narrow that their animals would have moved in a single row, a long procession patiently appeased, the dark edge of the forest finally in sight.

The Navvies cemetery near Kinlochleven 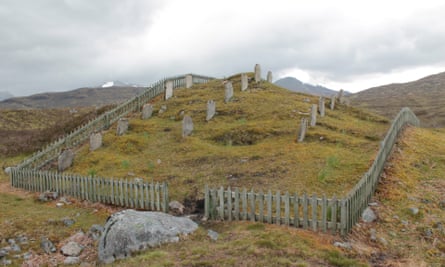 At the beginning of the 20th century, in a remote gorge in the western highlands, thousands of fleets were working on the huge hydroelectric power station near Kinlochleven. The dangerous work resulted in many of the workers dying during construction. They were buried in an improvised tomb under the steep walls of the reservoir. 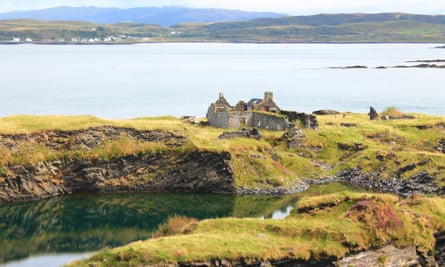 Commercial slate mining once took place here. A series of natural and economic disasters, beginning with a storm surge of epic proportions in 1881, inundated the quarries, rendering them unusable and destitute the area. The population had to leave and the island was abandoned. 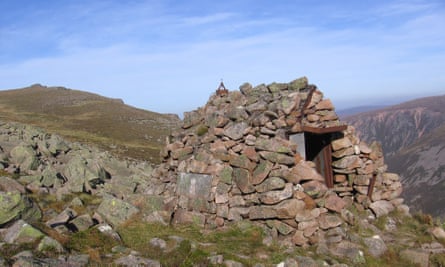 At over 3,000 feet on the steep west flank of Strath Nethy, El Alamein Hut was one of three skyscrapers on the Cairngorm Plateau. Together with the other two shelters, it was involved in the mountaineering disaster in Feith Buidhe in 1971 (when five school children and their instructor died in a snowstorm looking for one of the shelters) and had to be demolished. However, unlike the other two, it was never dismantled and the derelict structure can still be found.

Inchkeith Island, Firth of Forth 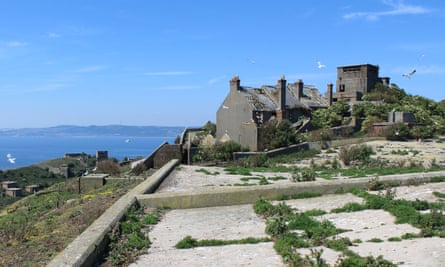 Inchkeith Island has served a multitude of purposes over the centuries: fortress, garrison, farm, lazaretto, prison, and religious settlement. It was even the venue for a bizarre linguistic experiment when King James IV supposedly banished two infants to Inchkeith to care for a woman who was deaf and non-verbal, who believed that any language the children acquired was innate from God given humanity would be tongue. In 1779 it was also the base for an attempted invasion of the port of Leith, led by the notorious naval commander John Paul Jones of the American Colonies’ Continental Navy.

The Glen Loin Caves, Succoth
The maze of fallen stones on this Argyll mountainside was once the focus of a sporting counterculture. For nearly two decades since the 1920s, groups of young workers, mostly from Glasgow, gathered around the caves to climb the vast rock faces of the Arrochar Alps.

• Patrick Baker is the author of The Unremembered Places: Exploring Scotland’s Wild Histories (£ 14.99, Birlinn), which is shortlisted for the 2020 Boardman Tasker Prize for Mountain Literature. Order a copy for £ 13.04 from The Guardian Bookshop

The Manila Cathedral in Intramuros, Manila